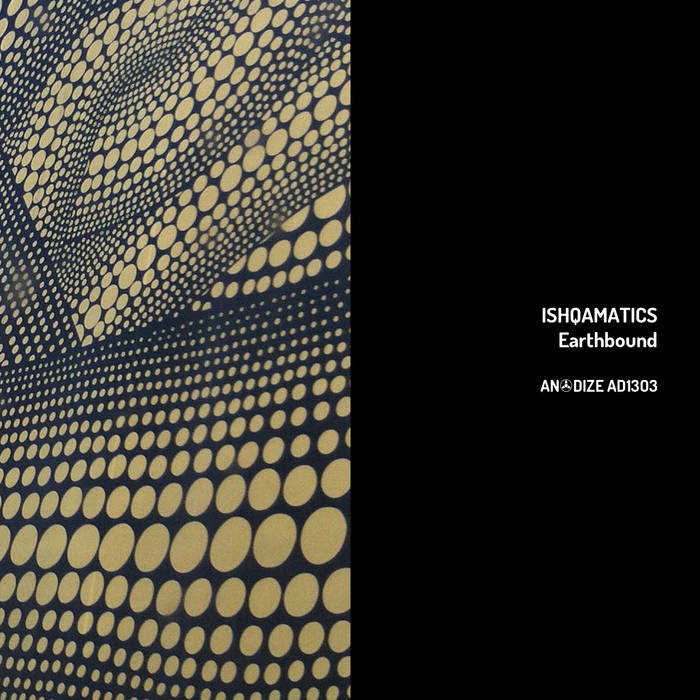 Si Matthews As good as 'Spacebound' is I prefer this release. Nice chilled electronica.

For further information, and to purchase the music of Ishqamatics and current related projects, look here:

"Earthbound" represents the first collaboration between two long-standing & highly regarded figures of contemporary electronica: Matt Hillier, aka Ishq, and Lee Anthony Norris, aka Metamatics (amongst numerous other aliases). Merging sensibilities that encompass everything from polymorphously exotic ambient & perception-altering harmonic soundplay to pillowy rhythmic contraptions, both Hillier & Norris effectively repurpose a multitude of landscapes afloat on both digitized pixeldust and the gorgeous pulsations of warm, humid analogics.

Matt Hillier, best known to ambient aficionados as Ishq, makes music informed with Buddhist, Sufist, yoga/tantra & other consciousness-raising philosophies as much as by the psychedelic flavors infusing much of the hybrid scenes sprinkled throughout 90s electronic music. His 2001 debut as Ishq, "Orchid", has long been regarded as a touchstone in UK ambient, and subsequent recordings has not diminished that stature. In fact, Hillier remains as busy as ever, recording as Elve and Ishvara, and defining his own unique aesthetic via his label Virtual.

Lee Anthony Norris doesn't rest on his laurels, either. He's a jack-of-all-trades genre-wise—whether churning out regal robot electro as Metamatics, glistening ambience as Nacht Plank, or sepia-tinted plangent techno as Norken, it's all part of the same dazzling puzzle. Norris is currently on a roll, with a baker's dozen of releases throughout 2013 and into 2014 plastered across his own .txt label in addition to work on Anodize and many other imprints. His early Norken records on UK label Hydrogen Dukebox are classics of beat construct and Detroitian depth, and his recent Anodize collaboration with Mick Chillage, the 2nd installment of their ongoing Autumn of Communion series, emphasizes the nomadic aspects of his always fascinating sound design. "Earthbound" perhaps—looking skywards, definitely.

US-based CD label Anodize is a locus for tactile visual audio. Cutting across genre boundaries, actualizing imagistic sounds from some of the most provocative electronic & experimental sonic artisans out there, all the label’s titles exude silver in all its opulent glory, featuring real-world manufactured CDs housed in rectangular, collectors edition stickered tins containing a two-panel insert, limited to just 300 copies. Anodize prides itself on the artistic value inherent in the physical object, what it represents historically & literally to the aural & visual mediums simultaneously vanishing into the digital ether.