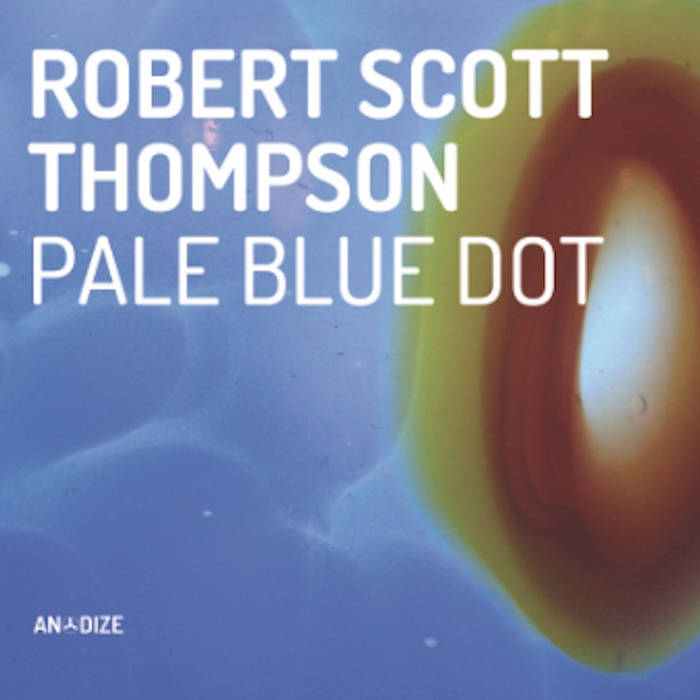 Richard Gürtler Sure, 78-minute "Pale Blue Dot" is not your easy listening ambient session, but with each new dedicated listen you keep on encountering new rewards, new filigrees, new glitters. It's more and more fascinating!!! A splendidly panoptic aural adventure with all trademarking earmarks and superb sound quality is delivered here by Robert Scott Thompson's infinite wizardry. The alchemy master at the very top of his craft, that's "Pale Blue Dot"!!!

The term musical alchemist best describes modern music composer Robert Scott Thompson. Combining his mastery of the electroacoustic, contemporary instrumental, and avant-garde genres into a swirling cohesive whole, he is an important pioneer on music's new frontier. Hailed as one of the most important composers working in electroacoustic, acousmatic and classical ambient music today, he has produced and published seminal work since 1976.

Influences as diverse as Chopin and Satie, Stockhausen, Varèse and Cage, and Bowie and Eno can be heard in Robert's music. Robert's first love is the electronic music synthesizer, but he is also an expressive vocalist, instrumentalist, video artist, computer musician, sound designer and film composer.

Thompson is a composer of both instrumental and electroacoustic music and is currently Professor of Music Composition at Georgia State University in Atlanta. He earned the B.Mus. degree from the University of Oregon and M.A. and Ph.D. degrees from the University of California at San Diego (UCSD). His primary teachers include Bernard Rands, Roger Reynolds, Joji Yuasa, and F. Richard Moore.

He has created work in a wide variety of forms ranging from chamber and orchestral music to works for the virtuoso soloist, electroacoustic music, and video and performance art. He is the recipient of several prizes and distinctions for his music including the First Prize in the 2003 Musica Nova Competition (Czech Republic), the First Prize in the 2001 Pierre Schaeffer Competition (Italy) and awards in the XVI Concorso Internazionale "Luigi Russolo" (Italy), Irino Prize Foundation Competition for Chamber Music (Japan), and Concours International de Musique Electroacoustique de Bourges (France) - including the Commande Commission 2007, among others.

He was a Research Assistant of the Center for Music Experiment (CME) Computer Audio Research Lab (CARL) during the 1980s, assisting significant composers in the realization of advanced computer music works. In 1991, he was named a Fulbright Fellow and Research Scholar by the Council for the International Exchange of Scholars (CIES) and was Composer in Residence at the Danish Institute of Electroacoustic Music (DIEM) where he collaborated on fundamental research in computer music and composed the long-form acousmatic work - The Strong Eye. More recently (2007), he was Composer in Residence at the Institut International de Musique Electroacoustique (France, 2007) composing the IMEB Commande Commission.

Over the years, RST has become increasingly well known internationally for his instrumental and electroacoustic works, often commissioned by prestigious organizations, ensembles and instrumentalists, and also for his many recordings which have been broadcast worldwide. His work has been presented in numerous important festivals such as the Koriyama Bienalle (Japan), Sound (Scotland), Presences (France), Synthese (France), Sonorities (Northern Ireland), ICMC, SEAMUS and the Cabrillo Music Festival (California), and has been broadcast on Radio France, BBC, NHK, ABC, WDR, NPR and numerous other networks around the world. His music is published on recordings by EMF Media, Neuma, Drimala, Capstone, Hypnos, Oasis/Mirage, Groove, Lens, Space for Music, Zero Music, Twelfth Root, Relaxed Machinery and Aucourant record labels (among others), and in print by American Composers Alliance (American Composers Edition) and Aucourant Media Productions. - from the Aucourant Records website

Recorded at the Resonance Observatory, Atlanta, GA in 2015